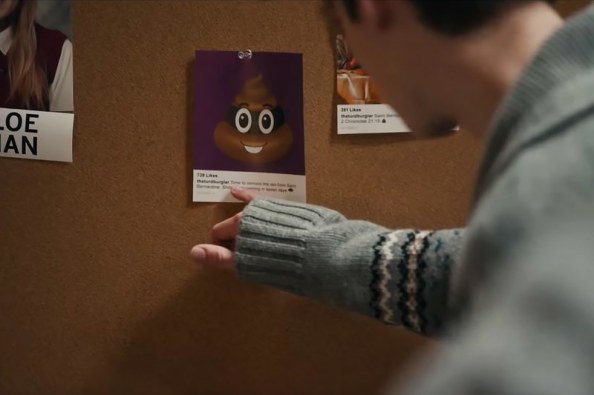 Wait… the mockumentary about male genitalia and human feces?

On September 14, 2018, Netflix released a sophomore season to one of its highly anticipated comedy gems, American Vandal. Reviews came pouring in for the show a week early, praising its quality for being consistent with the first. However, upon my first viewing, I noticed something about the said quality. This one is different. This one hits me like a diarrhea during the brownout (you’ll get that in a moment). This one digs a little bit deeper into its characters’ psychology.

Season 2 of American Vandal starts with the two aspiring documentarians from the first season, Peter Maldonado and Sam Ecklund, returning to the mysterious world of oddball cases to document as their senior year project. After browsing through Peter’s e-mail, they finally settle on a case. The case took place at a different high school, the fictional and highly prestigious St. Bernadine Catholic High School on November, 6th 2017. The crime? Poop. Lots of them.

“Wait… what? Why would the real life producers greenlit a storyline involving poop?”

To be fair, the crime is more complicated (and surprisingly less disgusting) than it sounds. It begins with a crime of poisoning students with laxatives, dubbed as an event called ‘The Brownout’, but then continues with a crime involving storing cat feces in a piñata, shooting people with a feces-covered pep-rally gun, and… something that I could not tell you since it would ruin the show. Yes, these crimes sound more like a combination of disgusting pranks which could possibly ruin a critically-acclaimed mockumentary. So the writers decide to shit on our brains by injecting intriguing lessons about character study and the human psyche.

Season 2 focuses on two possible suspects, the accused Kevin McClain and the seemingly-innocent DeMarcus Tillman who are both students at St. Bernadine. At first meeting, it seems like Kevin McClain is a somewhat loner who was accused of doing the poop crime because he was being bullied. Based on this premise, the people who first investigated the incident theorize that poisoning the students and covering their faces with poop is Kevin’s attempt to seek revenge. Classic soap opera stuff, huh? However, when Peter and Sam decide to come in and investigate, they deduce that Kevin could not be the Turd Burglar – a name that the actual criminal mastermind gave to him/herself. Enter DeMarcus Tillman. The initial reason for investigating DeMarcus is that Chloe, the girl who contacted Peter and Sam via e-mail in the first place, claims that she saw a Turd Burglar card on DeMarcus’ wallet. As Peter and Sam investigate, they make us viewers realize something: people perceive DeMarcus as the complete opposite of Kevin. Kevin is perceived as a weirdo who is constantly being made fun of by his peers while DeMarcus is the lovable athlete who people perceive as being the coolest person in school, even by the faculty members. While these attributes seem present in several scenes, both of them eventually dismiss the perceptions by telling their own version of who they are… which is when things start to get interesting.

Kevin McClain doesn’t necessarily think that he’s being bullied. For Kevin, people throwing fruits and laughing at him as he tries to slice them, is a way of embracing his identified presence. He enjoys being called ‘Fruit Ninja’ from time to time, but admits to the fact that embracing the nickname was just an early choice he had to take. “Nobody really wants to be the Fruit Ninja. I’ve just never really been good at fitting in, so at some point I decided to do the opposite,” Kevin explains. This statement suggests that Kevin seems to have a tough exterior when it comes to accepting an identity creation so he would never perceive himself as a victim of bullying. In spite of this, he still questions whether he wants to accept this arguably carefree attitude or not. At one point in the finale, a text message from Kevin himself reads, “But sometimes I wonder if I have anyone’s approval.” This appears as if Kevin is at least longing for one human approval on his individual identity.

Unlike Kevin, DeMarcus is a jock who receives a lot of love from everyone at school, but would sometimes get overwhelmed by this. In the finale, he tells Peter and Sam that the overwhelming amount of love creates this huge gap on not being able to know what is real and what is not. Sure his a star-athlete whose achievements bring in a lot of alumni money to the school, but this creates an internal suspicion on the true intention of the people he hangs out with. “When you’re in a position where everybody’s looking at you, nobody’s honest with you,” DeMarcus claims. He eventually sought comfort by opening up to a stranger because, according to him, it was the most real thing he had ever experienced. This is apparent when he explains, “She didn’t care that I hoop. She liked me.” What I find fascinating about DeMarcus’ words is that it tell us about how society operates in terms of accepting a certain character. When society accepts you, it usually accepts the idea of what people can benefit from you. People like DeMarcus are easy targets for society to accept and “like” because it generates a thinking formula which begins at the premise of, “Oh, I need to be close and remain in contact with this person so I can gain something for my future,” which is not genuine. Instead, society should’ve accepted people like DeMarcus, and people in general, with the critical thinking of, “Oh, I want to be friends with this person because I like his/her inner self and thoughts. We vibe as human beings.”

Furthermore, what is so great about the exploration of these two central characters is how online presence and technology play a part in creating false perceptions. Even on the first episode, the detective turns to an old video of him being called Shit Stain McClain, Snapchat videos of him being laughed at as the Fruit Ninja, and people’s comments towards videos of him reviewing tea to deduce that Kevin was being bullied instead of getting down to the bottom of his physical movement during the one-on-one interrogation. DeMarcus, on the other hand, has never shown a bad online presence or seemingly gets caught up with the whole bad side of technology. However, in an ending montage of the series, a compilation of DeMarcus is shown with Peter narrating, “We do all create versions of ourselves… to appear to be the curators of our stories, to appear to be in the driver’s seat of our own lives.” We also get to see more of DeMarcus’ real personality when he only uses text messages to open up. This gives viewers an indication that DeMarcus is more vulnerable when he utilizes an iPhone messaging app as a form of intimate interaction, as if his social media platforms like Instagram was just a mask of his own unhappiness.

American Vandal Season 2 is a mandatory viewing, especially for those who would perceive it as a toilet mockumentary at first glance. The reality is that it’s a psychology gem with rich lessons on character study and the very nature of human emotions. Loneliness, realism, these are some of the psychological questions that modern society faces. Put people like Kevin McClain and DeMarcus Tillman at the center of the story and we get a full representation on how two people at the opposite ends of society can still find similarities in loneliness. Even with technology involved, it only helps in terms of improving the quantity of human connections, not the quality. However, what the show has done splendidly this season is that it creates an argument on how social media and other online platforms disrupt our need for human connection. It’s not always bad and it doesn’t always help, it’s a balanced combination of both. As Peter notes in one of the best commentaries on TV monologue history,

“We’re not the worst generation. We’re just the most exposed. We’re living in a constant state of feedback. And judgment. So maybe the [online] masks are a tool to survive the time. Maybe they provide a thin layer of protection. A place to grow, discover, reinvent. The important part is having people who know you without the mask.”