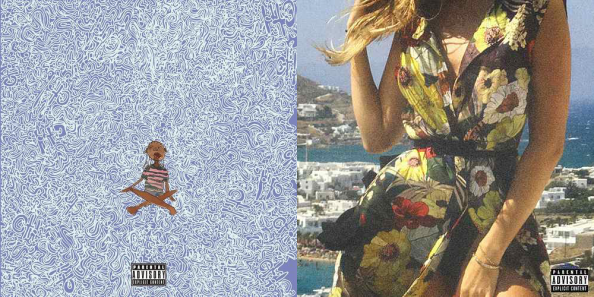 Drew Barrymore is an incredible actress who dominates the big, and now small, screen with her comedic charm. She made her mark on Hollywood at the age of 7 when she starred in Steven Spielberg’s groundbreaking sci-fi, E.T. the Extra-Terrestrial (1982). What transpired after that game-changing role was, sadly, a life of public scandals. The young newcomer made headlines when she started smoking cigarettes at the age of nine, started drinking alcohol at the age of eleven, and started doing drugs at the age of twelve, with an eventual admission to rehab at the age of 14. However, she made a strong comeback in the 90s by starring in some of the most quintessential romantic comedies, going as far as being nominated for a Golden Globe, at the time when the genre was a successful cash grab and critical darling. Fast forward to the 2010s and… now she’s a music icon?

Well, not really. However…

In January 2017, the singer Solána Imani Rowe, known professionally as SZA, put out a single that became an anthem of teenage, and young adult, insecurity. The title of the song is, you guessed it, Drew Barrymore. As a content representation, the title of a song is supposed to be directly sung. However, when you listen to the songs thoroughly, it becomes harder to guess on why the singer would name the song ‘Drew Barrymore’, given that there are no lyrics mentioning the actress. This made me curious as to what relation this song has with the Santa Clarita Diet actress.

On paper, the song ‘Drew Barrymore’ sounds like a storytelling device that specifically talks about insecurities in a relationship. When SZA belts out the words “warm enough”, it makes you question whether you are good enough and does your presence actually make your partner, or the people I hang out with in general, feel warm enough. This is essentially the pinnacle thought of insecurities, whether one will be good enough in contributing something and whether one should change for the betterment of creating a socially-acceptable identity. These two ideas are synonymous with the films Poison Ivy (1992) and Never Been Kissed (1999), in which Drew Barrymore starred in.

The aforementioned films that touch upon the issues of insecurity and the pursuit for identity gave me a realization: the name ‘Drew Barrymore’ in the title is essentially a tribute. Well not necessarily a tribute, it was at least first inspired by the movies, with a particular indirect link to Drew Barrymore’s 1999 role in Never Been Kissed. Speaking to USA Today, SZA mentioned how the character made herself feel better about being awkward and having crooked teeth and just being oneself. Furthermore, the beats that singer was listening to during production resembled the atmosphere of Never Been Kissed so much that she became certain to name the song ‘Drew Barrymore’.

Bryce Vine exploded into the music scene with a song titled, yet again, ‘Drew Barrymore’. While the song was actually released within the same year as SZA’s, it is musically different in sound and context. Describing the song to Genius, the singer mentioned that he wanted to write a song not focused on the looks of a partner, but on how someone would feel about that person. If the song is further linked to SZA’s, Bryce Vine’s version feels like it could be a response to anyone who feels insecure about their inner and outer look, a feeling in which every gentleman should respect and make it feel like that lack of uncertainty is unimportant and it’s the more personal qualities that makes up for an ideal partner.

The name ‘Drew Barrymore’ is more explicitly used in Bryce Vine’s song. A few seconds deep into the chorus, “the next Drew Barrymore” is sung as the girl who might actually have doubts about herself, and that’s okay. Speaking to Billboard, Vine confirmed that, “Drew Barrymore wasn’t necessarily about her, even though she is iconic and she’s kind of Hollywood royalty at this point. But my song was about a girl like her — like she’s kind of cool, she’s kind of sweet, she’s cute, she’s got her own thing, funny. That’s what I like.” This was very present during my first hearing, in which the first verse plays out like a romantic complement aimed at a specific girl.

After the release of Bryce Vines’s song, Drew Barrymore herself commented on the recent mainstream use of her name in music. Speaking to Refinery 29, she shared,

“I don’t know why I’m on the brain! I love SZA. It’s my favorite song ever and I have it on constant repeat; I’m even in the video for a nanosecond. The song is so good, but SZA’s is also easier for me to play because it doesn’t say my name, so if I play Bryce Vine’s I’m like, you know…”

With Drew Barrymore weighing in on the conversation, does this make her an icon of the current pop, arguably indie, music scene? Not necessarily for mainstream listeners, but it does put her on musicians’ radar. Drew Barrymore may not have any plans to branch out to the music industry, but her years of struggles and contributions in films certainly have inspired young artists like SZA and Bryce Vine. They both do not directly reference Barrymore’s life, but the songs they put out leave a lasting impression on listeners who wanted to hear some realism about teenage insecurities and romantic gestures. If Drew Barrymore could help by simply letting them use her name as a song title, then it makes her an important figure for musicians who are known for their unique lyrical angst.